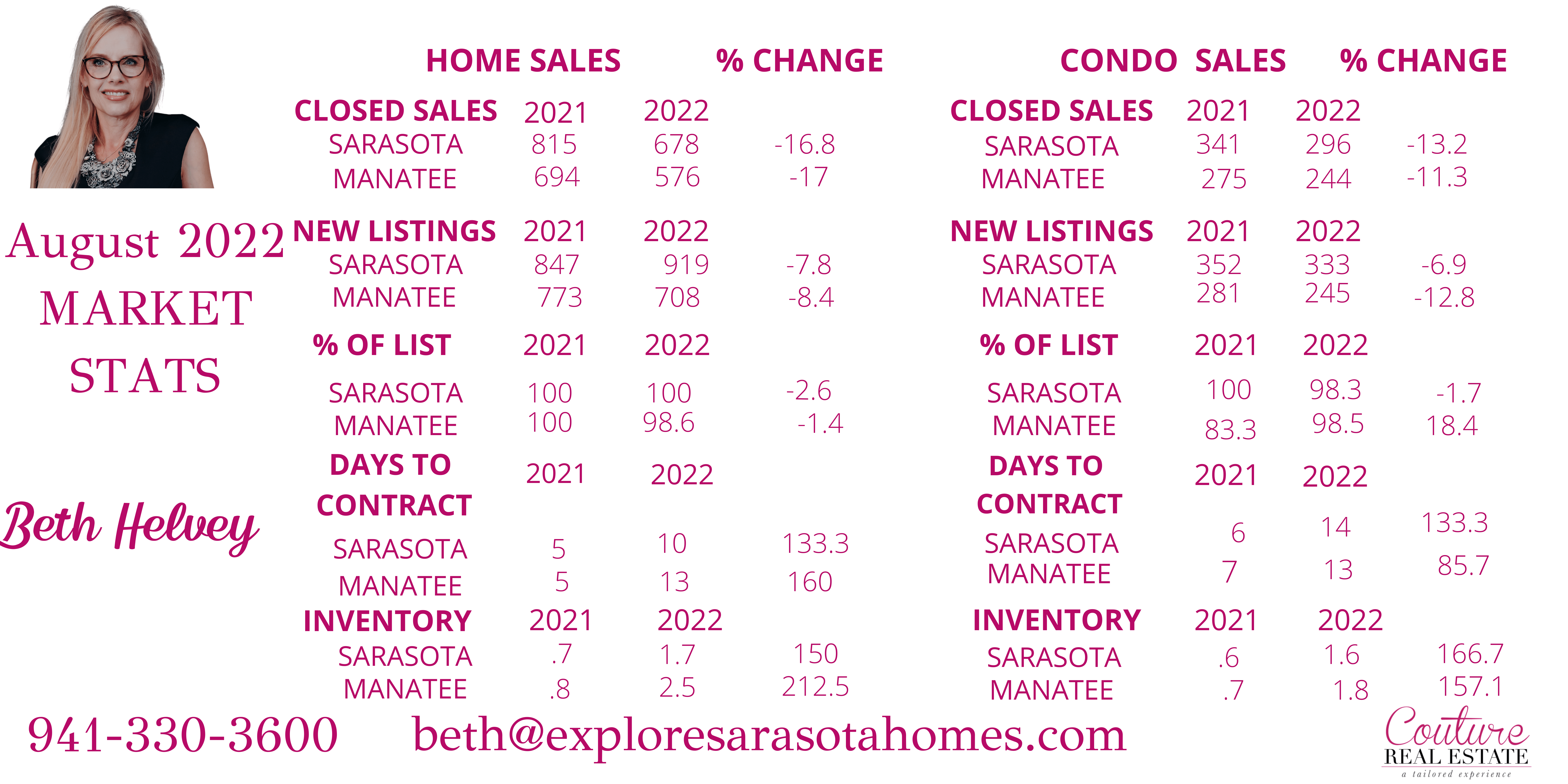 SARASOTA, Fla. (September 21, 2022) – For the second month in a row, the months’ supply of inventory for single-family homes is at a supply of 2 months or more in Sarasota and Manatee counties. According to data from Florida REALTORS® and compiled by the REALTOR® Association of Sarasota and Manatee (RASM), the housing market in August showed a decrease in sales and a rise in the median number of days from listing date to contract.

Closed sales for both property types in the North Port-Sarasota-Bradenton MSA decreased year-over-year by 15.6 percent to 1,794 sales. When compared to July of 2022, closed sales within the MSA increased by 3.2 percent in August.

“As expected, and as it’s been trending all year, the residential real estate market seems to have peaked, and the curve is flattening out,” said 2022 President of the REALTOR® Association of Sarasota and Manatee Tony Veldkamp, a Senior Advisor at SVN Commercial Advisory Group. “We see very similar numbers between July and August in relation to number of closed sales, pending sales and active inventory, indicating a steady but leveling market.”

The median sale price for single-family homes in Sarasota County increased year-over-year by 21.8 percent to $475,250 but is lower than the record-breaking price of $525,000 reported earlier in July. In Manatee County, the median sale price for single-family homes was $525,000 in August, a 22.1 percent increase from the same month last year. For the first time since March of 2021, the median percent of single-family homes sold at or above the original list price was reported below 100 percent in the North Port-Sarasota-Bradenton MSA, dropping by 2 percent to a 98 percent list-to-sale ratio.

In the condo market, Sarasota County reported a median sale price of $375,000, which increased by 19 percent from last year, while the median condo price in Manatee increased by 28.2 percent to $352,495.

“The median and average sale prices have either flattened out or dropped slightly over the past few months but is still significantly higher than this time last year. However, as we have been saying for the past few months, the time to contract is still only two weeks and we still only have a 2 to 2.5-month supply of home inventory, which means we need more inventory to support lower year-over-year price gains,” added Veldkamp. “The velocity of the market is still here, and it is still an excellent time to sell.”

At the end of August, there were 4,288 active listings combined in the two counties for both markets, which is a 133.6 percent increase from last year. The months’ supply of inventory, or the estimated number of months it will take to deplete the current inventory, has increased from last year by a whole month or more across the region in August.

“New listings for single-family homes, which had seen a steady increase since the first of the year, has been declining since June in Sarasota and showed a drastic drop from just last month in Manatee County,” added Veldkamp. “This is partly due to the time of the year but can also be indicative of a ‘wait and see’ mentality among sellers.”

Tags: All About Sarasota, sarasota real estate, The Housing Market

This is your chance to own a piece of paradise! This amazing 2 bed/2 bath condo offers incredible water and golf course views and is located in the ...Read More

This year we teamed up with Streets of Paradise to raise a total of $22, 275. We help a live auction with prizes such as a siesta key weekend ...Read More

Things to do in Sarasota this Halloween

October 1- 31, 2022: Are there ghosts in Sarasota? Find out for yourself on a guided, dark and creepy, 75-minute Sarasota ghost ...Read More